A History of St. Michael's Church 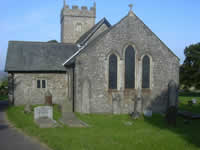 Little is known for certain about the early history of this ancient church – we must rely largely on deduction.

Let the visitor first go up to the Chancel and look to their left at the North wall. They will see three filled-in arches.  Two of these are apparently Roman and probably date back to the fourth century, from which we may deduce that a building stood here in Roman times.      Moreover, as the Roman road from Caerleon to Pembroke – the Via Lucia – ran within half a mile of this spot, it would be in accord with Roman military practice for a military post of some kind to be located here.

Christianity, however, was brought to Wales before it came to England.  It is known, for instance that Llewrwg, King of the Silures, who inhabited these parts, sent three men to Rome for instruction in AD 156 and one of these men named Medwy was canonised for his Christian teaching and medical work after his return.  It is suggested that the name of the parish (Michaelston-y-Fedw) is derived from the name of the two Saints, Michael and Medwy, and because very few churches in Christendom were dedicated to St Michael before 495 AD it may be that the building that stood here was used for Christian worship as taught by St Medwy even before it was requisitioned by some pagan Roman soldier during the occupation.  So, we cannot be certain, but it is not impossible that Christian worship has been practised here for nearly two thousand years, which would account for the sense of holiness and calm that everyone perceives on entering the building.

Now, look up at the window in the North wall of the Chancel above the arches.  On one side of the window there are the remains of a picture drawn on plaster.  Experts declare that this picture is of St Medwy and resembles others in Europe dating back to the fifth century AD.

The stained glass window over the Altar is late 19th century and was presented by Mrs Kemys Tynte in memory of her late husband, Colonel Charles Kemys Tynte.  The centre light depicts the Ascension, the South light depicts St Michael and (possibly) the warrior saints – St Maurice, St Thomas. St Gereon and St Barbara the patron saint of Artillerymen.  The North light shows St Cecilia and the martyr St Agatha.

The Altar has a top formed from a large slab of locally quarried stone. On it there are five primitive crosses engraved where it was anointed with consecrated oil by the Bishop of Llandaff in the fourteenth century.  The stone slab lay (cracked) on the floor of the chancel for many years and was only incorporated in the altar when the East window was installed

Looking towards the south wall of the Church, you see steps leading up to what is now called the Tynte Chapel. This was built in the 14th century by the Kemys family who lived in Cefn Mably.  Beneath the floor is a vault containing the bodies of the members of the Kemys family.  Wooden coffins were not always used, most of the bodies being wrapped in lead following the human form.  Those wrapped in lead must have been very tall men; but there is one small coffin in the vault with a sort of lead ‘hat-box’ on top of it.  This coffin is thought to contain the truncated body of Sir Nicholas Kemys who defended Chepstow Castle against the Roundheads and was killed or was perhaps beheaded after the Castle fell to the Parliamentary Army in 1648.  His son, who held Pembroke Castle in the same year, is commemorated by a plaque in the vault.  It is the recorded wish of the family that the vault should be opened periodically so that succeeding generations shall not forget.

The pointed arch that separated the Chancel from the Nave is not keyed into the side walls of the Church and may have been built much later.

The pews are late 19th century and replaced the high pews that stood there since the time of a fire that gutted the Church in the 15th century.  After this fire a Vestry was built outside the North wall of the Chancel which accounts for the arch that cuts across the older Roman one.

Returning to the door of the Church, the visitor will see the Font and an old oak table.  The Font dates back to the 16th or 17th century.  The stem is of Flemish design and the serpent is more likely to refer to the emblem of Aesculapius the Greek god of medicine than to the tempter of Eve.  The allusion is presumably to the healing powers of Baptism.

The church underwent a major restoration between 1999 and 2005, funded by a grant from the national lottery. This enabled the nave roof to be restored, a new heating and lighting system installed, and the organ renovated. The bells were refurbished with the very generous assistance of The Powell’s of Michaelston-y-Fedw Historical Trust and for the first time since their installation in 1782 made to ring ‘full-circle’.  At the same time a toilet and kitchen were built in the tower with a bequest from Bill and Ann Woodley who had worshiped in the Church for very many years.

The Church is fortunate to benefit from the generosity of parishioners. If you look to the wall on the North side of the Church, near the organ, you will see a Votive Stand in memory of a still born grand-child of a valued member of our congregation. Above this is a Holy Icon dedicated to St Michael. This was presented to the Church in November 2010 by friends from the Greek Orthodox Church in grateful thanks for our prayers during a serious illness of one of their family. Father Jacobus, Archimandrite and parish priest of the Greek Orthodox Church in Cardiff, of which the family are members, arrived with the gifts of bread, wine and oil to present the Icon to Father Malcolm Lane who received the gift on behalf of St Michael’s.

We are grateful to all our parishioner for their care towards the upkeep and maintenance of our Church here in Michaelston.

The parishioners of Michaelston-y-Fedw are alone responsible for maintaining this ancient Church and the visitor is asked to pray for those who bear this responsibility and if possible to make some offering through the collection box inside the Church.